City Year Seattle/King County is thrilled to welcome our largest corps
ever; at 67 members, the 2012 – 2013 corps hails from 21 different states
across the country. Each member of this year’s corps will commit ten months and
1,700 hours of service as tutors, mentors and role models dedicated to helping
students improve attendance, behavior and coursework – which helps students
stay in school and on track to graduate. 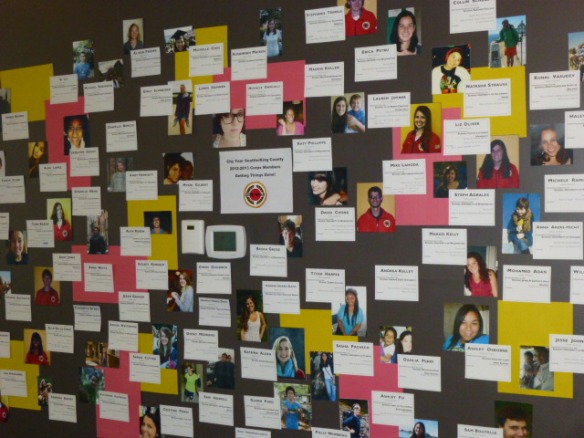 Decorating a wall in the City Year office, photos and facts are displayed describing the incoming 2012 – 2013 corps.

These new skills will complement the broad experiences and abilities the
corps brings to Seattle, including providing literacy tutoring in juvenile
detention facilities, former years of service with AmeriCorps, Arabic, Hebrew
and Spanish language skills, and years of state-level forensics competitions.
With their depth of experience, intense training and passion for impacting
education, we know this corps will make a difference in the lives of many
Seattle students in the coming year.

For an official introduction to our corps, in less than 30 seconds, click here.

City Year‘s tagline is “give a year. change the world.” The understanding of that tagline is found in its inherent duality. A corps member must work to change their outer world: the students and communities they serve, while they simultaneously work … Continue reading → 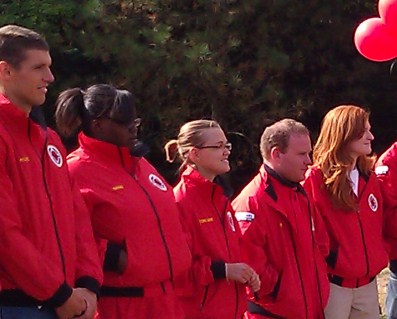 “She’s the strongest person I know,” a corps member said describing a friend to whom she dedicated her red jacket.

One of the most visible elements of City Year is the red jacket. The red jacket is a symbol of permanence, guidance and support. It is a promise that every member of our organization who wears the jacket is committed to serving our nation’s children and each corps member is working to positively impact our nation’s drop-out crisis by working as a mentor and tutor. When a corps member puts on the red jacket, they become a representative for the entire organization–they embody City Year’s mission, culture, and values. 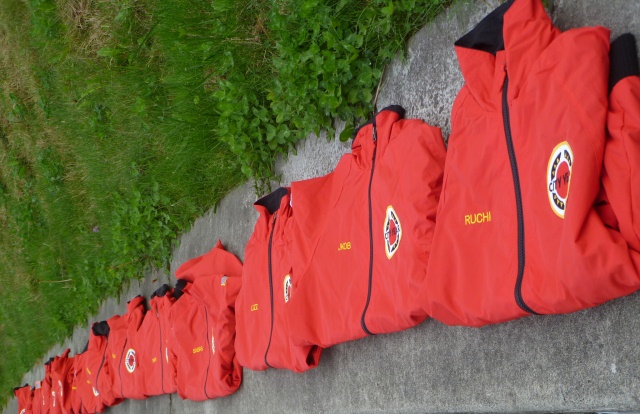 “He made me who I am today,” a corps member said of a loved one whom inspires and motivates his service

This year’s Red Jacket Ceremony was held at the Martin Luther King, Jr. Memorial Park in South Seattle. At the ceremony every corps member was asked to dedicate their jacket to someone influential in their lives or an inspirational idea. Dedicating the red jacket a very personal experience, and then sharing that dedication helps to build Martin Luther King Jr’s dream of the beloved community. 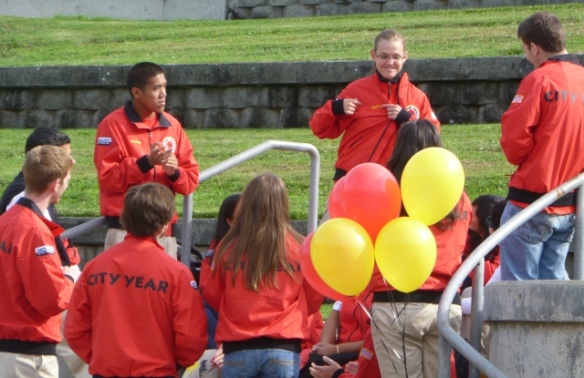 “She inspries me to be persevere through challanges I will face during my service year,” a corps member said a loved one that inspired him to serve.

Dr. King once said “…something must happen so as to touch the hearts and souls of men that they will come together, not because the law says it, but because it is natural and right. In other words, our ultimate goal is integration which is genuine intergroup and interpersonal living…Only through nonviolence can this goal be attained, for the aftermath of nonviolence is reconciliation and the creation of the beloved community.” 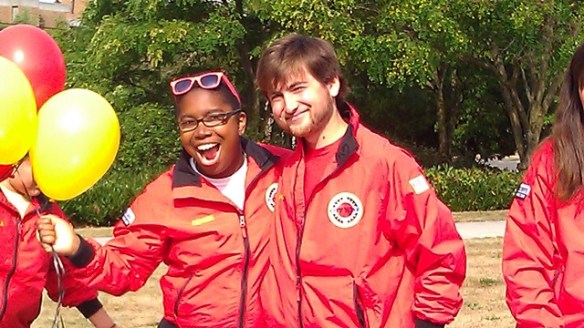 “You don’t know service, until you’ve met him,” a corps member said of a loved one to whom he dedicated his red jacket.

When you share your story with other people, you are opening up and trusting that people will be ready to listen with an open heart and an open mind. As a City Year member, there is nothing more important than putting on the red jacket, as all of your power and idealism flows from that seemingly simple action. Sharing what the red jacket symbolizes is a meaningful demonstration of what motivates us to serve and ultimately why we each work to build the beloved community. 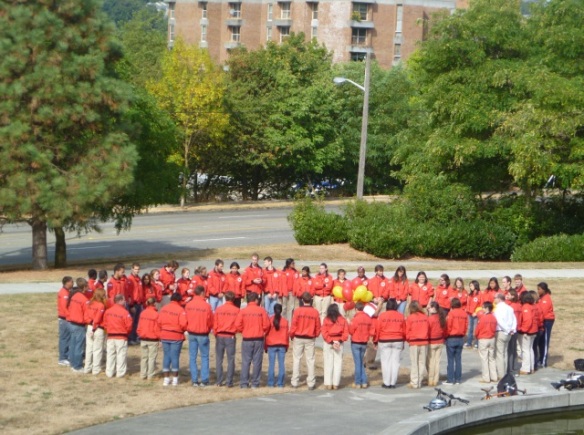 “I’m so proud to serve the students. This jacket is for them,” a corps member said of the students she will mentor and tutor this year. 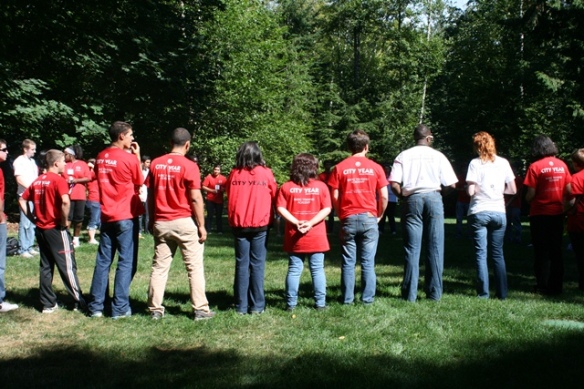 Seattle’s new corps have had an excitement-packed start of the year at  Basic Training Retreat (BTR), an overnight retreat where new corps members learn to integrate into City Year culture through team building and self-reflection activities. The 2011-2012 corps had the chance to connect to each other and City Year culture in a way that got them up and moving. 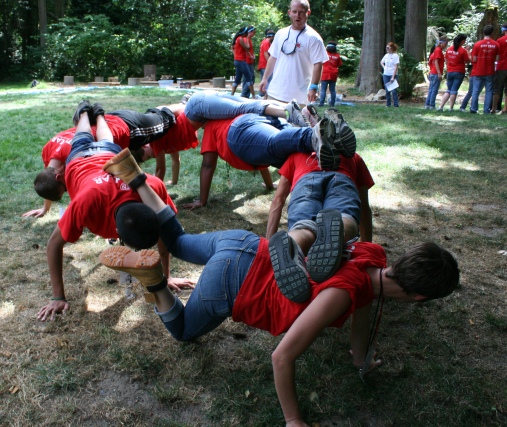 City Year’s culture and values including teamwork, inclusivity and emapathy are at the heart of our organization. Together they fuel and promote the idealism that will carry corps members through their year of service as mentors and tutors for students who are at risk of dropping out of school. 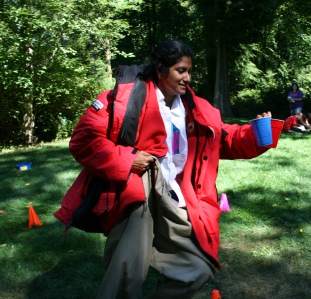 A corps member completes one of the Idealist Handbook Challenges.

The Idealist Handbook was one of the first tools the new corps was able to unravel at BTR. While less regonizable than our red jackets and Timberland boots, the book is an equally important element of the corps uniform. The Idealist Handbook illustrates City Year’s dedication to civic leadership, action and transformation, with a focus on helping students succeed.

This year’s senior corps team, composed of a group of second year corps members who have returned to City Year to lead new corps members, wanted to introduce the handbook in a way that would inspire the corps to engage with the handbook as early and often as possible. 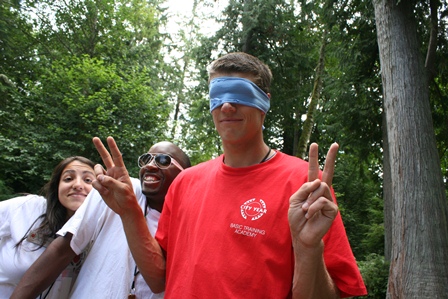 Many of the Idealist Handbook Challenges had consequences to rule breaking. This corps member had one of his senses taken away.

To achieve this goal, Idealist Handbook challenges were created ranging from uniform relay races to power greeting competitions to district feeder-pattern cup stacking. Awards were given out for team spirit, friendly competition, patience, and adversity in the face of defeat. The overall winning team was awarded the Cup of Idealism. 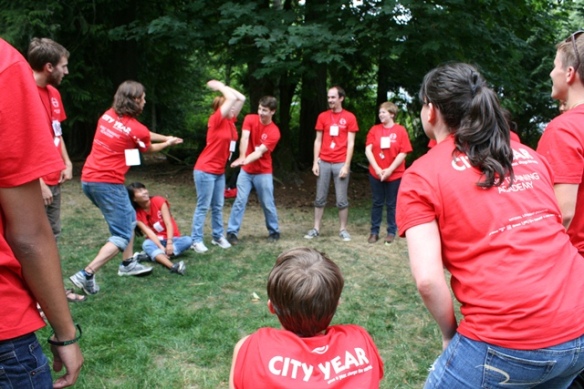 The "WAH!" Game is one of the many activities Corps Members learn during BTR. This way they can introduce new games to their students at the start of the year.

Each month the senior corps will host a new challenge for the corps involving the Idealist Handbook, and each month there will be a team that holds the title Champions of Idealism and the Cup will be passed.

It was a great deal of fun and the knowledge and understanding the corps developed during the challenges will help them grow as a community while grounding their service in City Year’s culture and values.

Corps member working with a student.

The 2010 – 2011 school year was the first year that City Year Seattle/King County implemented Diplomas Now, an innovative school-turnaround model designed to work in partnership with some of our nation’s most under-resourced schools.  We are currently in two middle schools: Aki Kurose Middle School and Denny International Middle School.

One of the students at Aki Kurose MIddle School was assigned to do a free write during class. In her assignment, she highlighted City Year and more specifically, her City Year corps member, Megan. This segment is a heartwarming depiction of the impact of the work we do, and the connections and bonds we establish every day.

I like City Year this year. Megan is COOL!  I like Megan, because she helps us A LOT. She always tries her best to help us. I think that’s very COOL! Also, she is very funny. She likes to joke around and it makes talking about school fun! I think she’s a GREAT friend and I’m really happy that I have 6 periods with her. Sometimes I bother her too much and I’m scared she might get annoyed and leave. I hope she doesn’t leave.
In 5th grade, I was also friends with a City Year named McCall. She was cool, too! She convinced me to draw for a civil rights contest. I actually joined just for fun, but I won third place. I drew Jackie Robinson. I wish there will always be cool City Years in my classes. Even though High School! They make the school year go by so fast.

Our second year of Diplomas Now will commence in just a few short weeks and we can’t wait to continue to make an impact in the lives of Seattle students.