Lauren Joyner, the author of this post, is 23 years old and came to City Year Seattle from Elon, North Carolina. She went to the University of North Carolina. She serves as a tutor and mentor for Wing Luke’s third grade class. A fun fact about Lauren: she can recite every chapter of the Harry Potter series.

James*, a fifth grader at Wing Luke Elementary, began his year as an unwilling participant in the Discovery Club after-school program. Organized and run by the City Year team at Wing Luke, the Discovery Club allows students from kindergarten through fifth grade to meet biweekly for recess, homework tutoring, and structured activities inspired by cultures and communities around the world.

One of only two fifth graders in the program, James claimed that each activity was “for babies” and “so boring.” After three days of refusing to participate in the planned activities, and subsequently sitting aside in the “Think It Over” zone, I knew that something needed to change for James. I serve in a third grade classroom, so my interactions with James are limited to our meetings at Discovery Club and in passing around the school. I made it a goal to acknowledge James whenever possible, so that I could get to know him.

Discovery Club runs year-long, and with four family members in the club, I knew he was in it for the long haul. I went to talk to James.

Starfish after-school students work on an activity together.

I told him, “James, we’re decorating pumpkins today. We’ve got a lot of fun paint colors and art supplies. I bet you’re good at art, and who doesn’t like painting a vegetable?”

“No! That’s kids stuff!” he exclaimed. Hmm, time to try again, I thought.

“Ok, well guess what? Next Tuesday, we’ll be playing a soccer game while learning about Guatemala. I’d like to see you beat Mr. Eric. I’m sure you could take him! Do you play soccer?”

“Ugh, NO!” was his cutting reply as he shifted, turning his back to me.

I didn’t learn much from James about his interests during that conversation, but I let him in on a secret.

“So, James. The other City Years and I were talking, and we think that we could use someone like you, with all of the experiences and knowledge you’ve gained from your years at Wing Luke.”

He remained in his defensive stance, facing the wall with his arms crossed, but he began to glance back over his shoulder.

“There are a lot of younger students in Discovery who could benefit from a role model. Is helping us by being a leader in the club something you would like to do?”

James immediately responded, “Yeah,” followed quickly by, “wait, I mean, no!” He tried to take it back, but the damage was done. I knew something was resonating with him.

During the following sessions, James refused to do certain activities, but he began participating in others, particularly homework time and recess. He was less disruptive, no longer shouting out how bored he was.

Any time I see James on the playground, I exclaim, “James! You look SO excited for Discovery Club today! I know this is your favorite day of the week!” 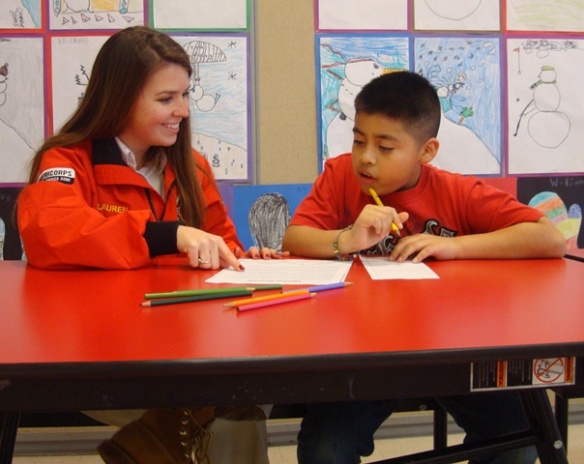 Corps member Lauren Joyner of the Samsung City Year Team at Wing Luke Elementary works with one of her students.

This exchange has become routine with us. He plays his part as the agitated, unwilling Explorer, but now there’s a hint of a smile on his face when he’s denying his love for the program.

I know he’s still not completely invested in Discovery Club; however, he painted pictures while lying on his back during our Michelangelo lesson. He played basketball during an activity about Turkey.  He helps to pass out supplies and works with his teammates, rather than moving to the “Think It Over” zone.

James doesn’t have to love Discovery Club, and I’d say it’s realistic to think that he isn’t going to. My goal for James (and for each of the students I serve) is for him to know that someone understands how he is feeling, and to help him believe that his time in the program can be a worthwhile experience filled with positive moments. Based off the small successes so far, I’m optimistic about how his year will play out.

Jessie Curry is 22 years old and from Iowa. She works as a mentor and tutor for Wing Luke Elementary's 5th grade class. One of her favorite student moments was when a second grade girl decided to give the City Year Team nicknames. Jessie was named "cute eyebrow."

The Starfish Corps at Wing Luke Elementary has been hard at work learning about “needs and wants”.  For the past six weeks, the students have learned about many facets of the phrase “needs and wants” through a variety of activities including art projects, relay races, and games.

The Starfish gained an understanding of how wanting a new gaming system and needing food to eat are different experiences just as wanting friendship and needing to feel cared about are different experiences. Through a role playing game, the Starfish discovered how a family’s size, salary, and unexpected life events can change what a need or want is for that family. The Starfish also explored which elements are needed in a community to create a positive environment for people to live. In addition to learning about wants and needs, the Starfish had the opportunity to take action and fulfill the emotional needs of patients at the Seattle Children’s Hospital by creating cards and letters for them.

The Starfish Corps discussed how there are issues, such as stealing or bullying, that can affect our needs and wants. To address these issues, the Starfish created public service announcement videos that spoke out against acts that impact the ability for students to feel safe and happy at Wing Luke. The goals for this project were for the students to be creative, work together, and send out a message about why the issue is wrong, how it impacts them, and to encourage others to make choices that would positively affect the Wing Luke community.

Students in the Starfish corps participate in after-school programming.

The Starfish definitely stepped up and produced great videos surrounding the ideas of bullying and stealing. Each team put a different spin on their Public Service Announcement and expressed powerful opinions including:

“Stop bullying.  It needs to stop.”

Not only did every student participate in this project, but the teams had the chance to speak out against real issues that have recently occurred in their school. The City Year team at Wing Luke hopes to incorporate the videos into Monday morning assemblies so that the Starfish Corps can address a need in their school for social change and awareness.

By being a part of this program, the Starfish students have the chance to share a powerful message with their peers, elicit change through creative videos, and fulfill a social need for their school.

Kyle Fisher- Hertz is 21 years old and serves Wing Luke Elementary’s fourth grade as a mentor and tutor. When asked why he serves with City Year he replied, “I serve because injustice can be combated in many contexts, but … Continue reading →

Originally from Albuquerque and a graduate of the University of New Mexico, Jonath Ochsankehl is a City Year Seattle/King County corps member serving at Dearborn Park Elementary School. In the post below, Jonath reflects on his first month of service in Seattle and the 2011 Opening Day ceremony.

On October 7th, 2011, City Year corps members from across the nation celebrated Opening Day. In preparation for the event I found myself hammering out Double-D stomps (a Physical Training move), memorizing the City Year pledge, and constantly being reminded of the reasons why I chose to serve. Initially I was unsure of the purpose of the Opening Day Ceremony, but one of my fellow corps members gave light to its significance when she explained that it was the one day out of ten months where the focus would be on us. It would be a brief couple hours where we would not merely be reminded of, but celebrated for, our commitment to serve– until we were inevitably sent back to our respective schools to spend our time and energy dedicated to making children aware of how amazing they are, how much the world has to offer them, and paving the way for them to succeed. 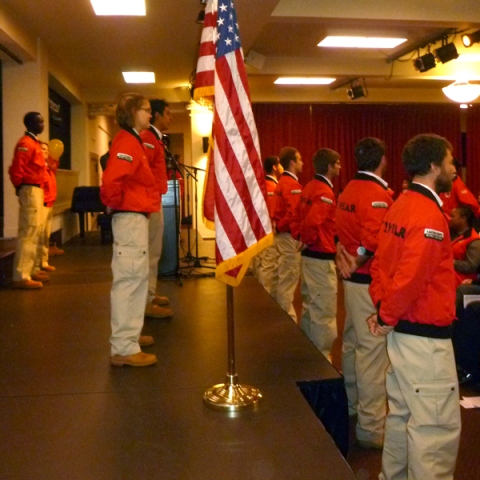 I stood inside Town Hall that wet, Seattle morning and proudly took the pledge to serve to the best of my ability. While I may not yet know the impact I will have on the children I currently work with, corps member, Jessie Curry inspired all of our service during her address to the corps. 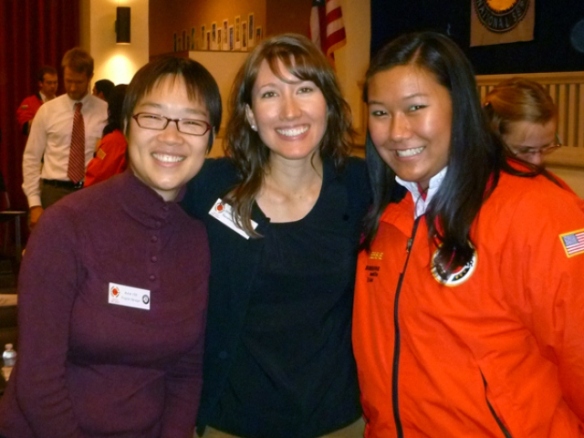 When Jessie Curry was handed the hammer of service from a member of last year’s corps, she spoke to us about how many of her students at Wing Luke Elementary ask about members of last year’s corps and reminded us that next year we will be “those corps members who made such an impact on the students we serve that we are remembered even over an entire summer and beyond.” While it saddens me to be reminded of my departure from this program so near the start of my service, it also inspires me on those difficult days when I question my abilities as a mentor due to unfocused and challenging students.

Opening Day reminded me not only of the difference we as a corps will be making in the lives of numerous children, but also of the support we have from the Seattle community. City Year supporters attending Opening Day included National Leadership Sponsors like Comcast and local Seattle sponsors including JP Morgan Chase, NELA,  and Macy’s as well as Seattle City Councilmember, Tim Burgess, Seattle Public Schools Superintendent, Dr. Susan Enfield, Dearborn Park Elementary Principal, Angela Bogan, and local and National City Year Board Members. That morning amidst City Year champions I felt connected to our own brother and sister City Year sites across the world united in a common goal as stated in the City Year pledge:

To serve as a city year member to the very best of my ability,

To honor the rules and expectations of City Year,

To respect my colleagues and the people and communities we serve,

To lead by example and be a role model to children,

To celebrate the diversity of people, ideas and cultures around me,

To serve with an open heart and an open mind,

To be quick to help and slow to judge,

And to build a stronger community, nation and world for all of us.